Trending
You are at:Home»CESAR News»CEA Announce New Recruit to the CESAR Network Team
By Louise Carney on October 4, 2019 CESAR News

The Construction Equipment Association (CEA) has announced the appointment of Clive Harris as a consultant to help deliver the new specialist police unit to combat construction and agricultural equipment crime. He was formerly the Agricultural Vehicle Specialist for leading insurers NFU Mutual and an insurer representative on the CESAR Review Committee which supervised the work of the successful official plant marking and registration scheme, CESAR.

CEA Chief Executive, Rob Oliver welcomed the appointment; “We have worked with Clive for some years over which time he has been the source of excellent advice and support on plant theft and insurer issues. The opportunity for him to join “Team CEA” was too good to miss. He will help manage the relationship between the insurance sector, the police and other stakeholders in relation to the CESAR programme. This comes at an important time in the run-up to the creation of a new police resource to build on the work of the old PANIU organisation which suspended operations earlier this year.” 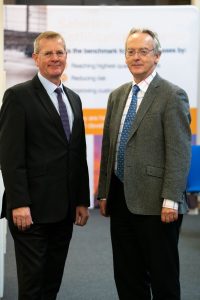 Stephen Howarth, AEA Economist also commented on Clive’s new role; “Clive has an unparalleled knowledge and experience of the issues around security and theft of machinery and of the partnership between the industry and the police to minimise the risks. I can’t think of a better person to take on this role, which should ensure that the new police unit will make an effective contribution to reducing the impact of rural crime.”

Clive Harris “I am delighted at being given the opportunity to continue working with the CEA, AEA and all CESAR stakeholders to make a positive contribution.

We live in a world of constant change and the suspension of PANIU was disappointing. However, I am confident that the current work going on behind the scenes will create a very strong successor to challenge Plant, Construction and Agricultural vehicle theft, taking it to the next level through stronger alliances”.

The successor to the old PANIU organisation will be announced in the near future.

Keith Dolbear, Chair of the CEA’s CESAR Review Committee confirmed; “Whilst the details concerning the formation of a new dedicated police unit are being worked through, the industry can continue to call on the expertise of the CESAR team. This includes the 24/7 “hotline” and the continuing links with police forces up and down the country. Support for the CESAR scheme, and its growing number of applications has never been stronger”.