Trending
You are at:Home»General News»Construction equipment sales on a downward trend in 2019
By Louise Carney on October 31, 2019 General News
Retail sales of construction and earthmoving equipment in the UK market fell by 7.4% in the third quarter of the year, compared with the same quarter in 2018. This follows falls of 1.2% in Q1, and 5.4% in Q2, resulting in sales in the first nine months of the year standing at 4.8% below the levels seen during the same time period in 2018. This latest update shows that equipment sales are on a downward trend in 2019, with the quarterly rate of decline increasing as the year progresses.
The first graph below shows quarterly sales on an index basis from the construction equipment statistics exchange *, using Q1 2018 as 100, and illustrates this downward trend. Previous versions of this graph showed an index based on Q1 2016, but this has been changed as a result of the good news that company participation in the statistics exchange has increased, and reflects a more comprehensive coverage of the market in 2018 and 2019. 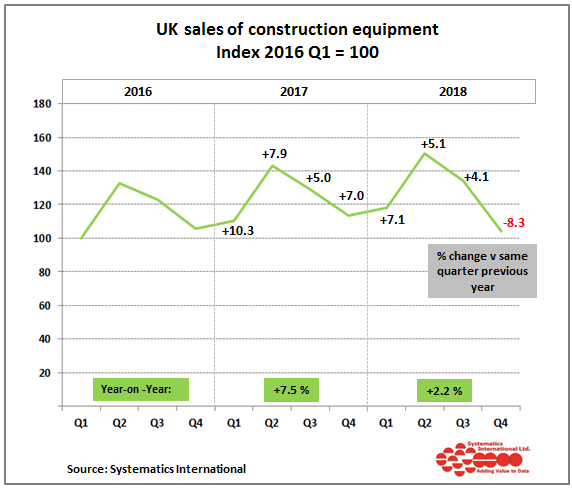 Sales of equipment in 2019 were expected to decline after reaching a peak level in 2018. However, they have also suffered from the impact of market uncertainty created by Brexit, and more recently, further uncertainty over major infrastructure projects such as HS2. In the first nine months of 2019 equipment sales reached 25,700 units, but are still at relatively high levels compared with earlier years.
The fall in equipment sales in the first nine months of the year has been led by two of the most popular machine types, mini/midi excavators (up to 10 tonnes) and crawler excavators (over 10 tonnes), which showed reductions in sales of 11% and 2%, respectively.
The strongest sales amongst the high volume equipment types have been experienced by telehandlers, which are showing a 9% increase on 2018 levels. Reports suggest that underlying market demand has remained strong for this type of equipment, while purchasing of machines has been on a short lead time due to market uncertainty. This is helping sales in the second half of the year, with requirements coming in at short notice to meet steady underlying demand.
Sales of some of the smaller volume equipment types have also been strong in 2019, as shown in the second graph below (grouped together in the “Others” category), and show a 12% increase in the first nine months of the year. This includes growth in sales of skid steer loaders, wheeled excavators and crawler dozers. In contrast, the weakest sales this year have been for compaction rollers, reflecting poor demand from the road sector.
* The construction equipment statistics exchange was taken over by Systematics International Ltd. in 2017. This scheme is run in partnership with the Construction Equipment Association (CEA), the UK trade association.
Share. Twitter Facebook Google+ Pinterest LinkedIn Tumblr Email
Previous ArticleEx-construction bosses set up global Swim Rise movement to help mental wellbeing
Next Article Prevention is better than cure – says Inspector Nasset