Trending
You are at:Home»Member News»JCB Celebrates a record number of contracts for Apprentices
By Louise Carney on March 5, 2019 Member News 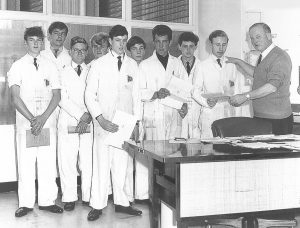 A record-breaking group of JCB apprentices had two reasons to celebrate at the launch of National Apprenticeships Week on Monday (March 4th).

A total of 79 apprentices were awarded their apprenticeship certificates – at the same time as getting coveted contracts of employment with the Staffordshire-based digger maker.

The group is the biggest in the history of JCB to graduate as Level 2 and 3 apprentices in a single year. They received their awards from JCB directors at a special graduation ceremony at JCB’s World Headquarters, Rocester.

JCB has a long history of recruiting apprentices and this year marks 55 years since the first intake of nine completed their training and were presented with their apprenticeship certificates by company founder Joseph Cyril Bamford.

JCB Chief Executive Graeme Macdonald said: “New talent joining the business is fundamental to JCB’s future growth and success; our business is growing rapidly and the apprentices are an important part of our plans for the long term.  Over the past five years JCB has invested £30 million into its training programmes with more than 700 new recruits joining the business as apprentices or graduates. Their commitment to learning has been exemplary and their hard work has paid off with the award of full-time contracts.”

JCB Director of Learning and Development, Max Jeffery said: “The apprentices who have been awarded full-time contracts range from age 18 to 38 and include a former professional rugby player, pub landlord and cleaner as well former students from the JCB Academy. The diversity of this year’s graduating apprentices shows this is a great route into a new and promising career – no matter what your background, age or experience.”

Adam Parkins, 29, from Alfreton, Derbyshire. Married with four young children, he left school aged 16 to pursue a professional rugby career with Premiership clubs Leicester Tigers and Northampton Saints, where he remained until he was 27.  He is now a welder and assembler working on the iconic JCB Loadall production line, at Rocester.

Wesley Hemmings-Topliss, 19, from Burton. Having studied a BTEC at college, the former Thomas Alleynes High School, Uttoxeter, student found work as an office cleaner at JCB. He saw his friends studying apprenticeships with the company and decided he wanted a career making the machines too. He is now a welder in the JCB Hydraulic Business Unit, at Rocester.

Tom Clarke, 29, from Stafford, a former team leader at Screwfix, Stafford, where he was in charge of almost 100 people. Tom has become JCB’s first Level 2 Health and Safety Apprentice with the company’s Loadall division, at Rocester.