The risk of suicide amongst workers in construction roles is three times higher than the male national average. More than 1,400 construction workers took their own lives between 2011 and 2015 in England, according to the Office of National Statistics.

Previously running construction companies, Paul Holliday and Michael Henderson noticed a massive and frightening suicide rate within their sector and, after both moving to Australia, set up The Human Excellence Project and sent out the Swim Rise movement world-wide to challenge people from all walks of life to help to improve their mental wellbeing.

Over 1,000 people from 25 different countries around the world signed up to run into the sea at the break of dawn for the first-ever Global Swim Rise.

After moving to Perth in Western Australia 11 years ago, Paul Holliday met friend and business partner Michael Henderson, 31, who emigrated from Teesside, at a workshop for men’s mental health.

Michael said: “There is an epidemic amongst men who are taking their own lives because they don’t know where to turn or what to do.

“People who are depressed and suicidal can’t see a way, they are lost.

“I have been in the construction business and there is a real problem with depression and suicide. People can’t see a good future because they have a bad now. We are working to change that, one run into the sea at a time.” 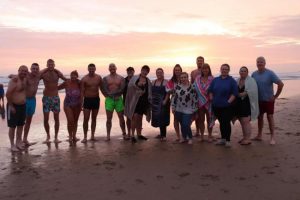 Paul and Michael come together each morning to swim in the sea and have been joined by a growing number of people, immediately seeing the health and wellbeing benefits of the Swim Rise.

Paul explained: “We have had people from all walks of life. Multi-millionaire CEOs who want to find themselves again and people without a job who feel lost. Once we get in that water we are all the same, we share a great bond.

“Once we have been in the sea we get out, grab a coffee and a chat, warm-up and some amazing conversations happen. I believe this will change the world. Community is what we need right now.”

He added: “There is a lot of disconnect at the moment. A lot of this is down to things like mobile phones. People are looking for instant gratification. We are not teaching our kids delayed gratification, that if they make the right choices and do the right things on a daily basis, there will be a much bigger reward in the long run, such as their good health.”

Paul emigrated to Australia with his wife, Mel, and his two children after their estate agency business virtually collapsed overnight. He later set up the movement as a way of coping with the grief of losing his father to cancer.

He said: “We had 12 houses and a Porsche and within the space of two weeks we had nothing. It seemed like such a massive blow at the time but having travelled for five years in my early 20s, I had always had a desire to come to Australia and so we took the opportunity to move out. It turned out to be a huge blessing.”

To date over 6,000 people have jumped into the sea at sunrise as part of the project.